NRA Show 2014 Recap and The Swirl of Excellence Award

This year’s National Restaurant Show was a huge success for vendors and attendees alike. The show was the usual mix of technology, equipment vendors, and amazing bites to sample. Some of the highlights from the show--including the winner of The Revel Systems’ Swirl of Excellence Award--are below.

National Restaurant News published a list of the top 10 food and drink trends of the NRA Show. The single most displayed food attribute at the show was gluten free, which was, according to NRN, “to be expected, as estimates for how many Americans are avoiding gluten are as high as 30 percent.” Other items of note include ginger--flavoring everything from beer to classic cocktails--and plant-based food, especially root vegetables and Brussels sprouts, which were reported as “possibly replacing kale as the ‘it’ member of the brassica family.”

Progressive Grocer, reporting live from NRA 2014, points toward trends driving deli-prepared growth:  “Consumers look for options that require little to no time to prepare and are easy to transport on-the-go.” That is, consumers are looking for more DIY meal options that are easy, accessible, and require little prep time. This doesn’t mean they don’t want choices, however, as the “trend toward personalization and customization will continue its growth as well.”

Foodable pointed out that there were over 600 Instagram photos in just two days and provided a great infographic detailing just how many people were using Instagram at the show: 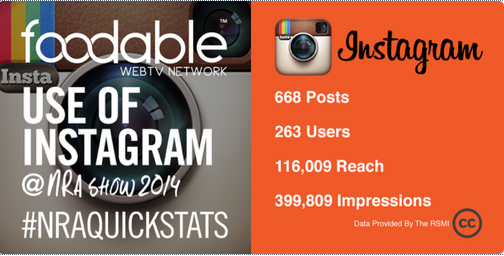 Foodable also gathered stats on how many people were tweeting about the NRA Show, which included over 6,000 posts and over 40 million impressions.

The Swirl of Excellence

The winner of the first inaugural Swirl of Excellent Award goes to Chef Pablo and Kevin from Montebianco. As many readers of our blog now, Revel Systems sponsored a frozen yogurt taste-test competition—a panel of expert judges tasted two flavors from participating frozen yogurt vendors at NRA and selected the winner for the “Swirl of Excellence." The winners also received a trophy, pictured below. 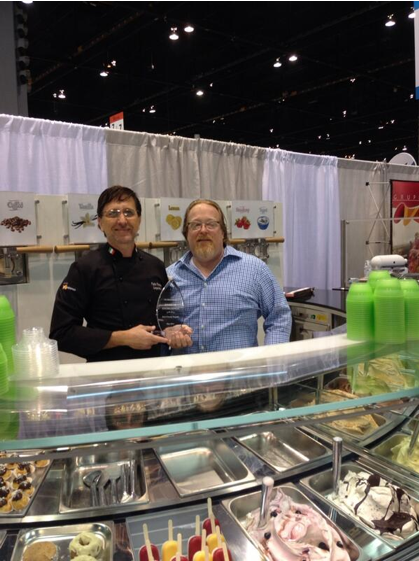 Check out the video below for a client testimonial at the NRA Show.