Could Bitcoin Be the New Gold Standard?

Bitcoin was the breakout star of 2013. Trading around $13 at the start of 2013, it climbed slowly to $200 over the next 11 months and then rocketed past $1,200 by the end of November. Its meteoric rise was in sharp contrast to gold’s steady decline over the same time period. At the close of 2013, with gold’s trailing-twelve-month 27% loss in mind, many experts predicted another rocky year in 2014. Many of those same experts warned of an upcoming burst to the Bitcoin bubble, as well. Is either a safe bet?

First introduced in 2009, Bitcoin, a decentralized, open source, digital currency exists virtually and is not controlled by any central authority. One of many virtual currencies in existence, it is the most well-known and widely used. Consumers and businesses in some 190 countries are now transacting in Bitcoin.

Bitcoin as a currency is highly volatile, but it depends on whom you talk to whether or not it presents a good investment and how it compares to gold and other currencies. Maggie McGrath[1], a market news and personal finance staff writer for Forbes, noted that “Bitcoin can be dangerous because it can be very opaque and difficult to understand, and one of the first rules of investing is don’t invest in what you can’t explain yourself.”

She went on to quote a recent Citibank analogy designed to scare any potential Bitcoin investors, comparing Bitcoin to Beanie Babies. But it’s important to remember where that comparison is coming from – a bank – which has no control over Bitcoin and little interest in the currency other than to see it become obsolete.

The trends we’ve seen with Bitcoin over the last year, and gold for that matter, are not new. Bitcoin is nothing if not trendy, and has a habit of making the news. Arguments over whether Bitcoin was in the midst of a bubble at the close of 2013 have been answered, rather loudly, by the tumble it took earlier this month when Mt. Gox, the third largest trading exchange for Bitcoin, put a freeze on Bitcoin withdrawals, citing a security issue with the cryptocurrency’s underlying architecture.

Mark Williams[2], an instructor of finance at the Boston University School of Management, has predicted that in the first half of 2014 Bitcoins will lose almost 99 percent of their value, falling below $10 (USA). He compares Bitcoin, which has had as much as 35 percent fluctuation in a single day, to the U.S. dollar, which fluctuates about 10 percent on an annualized basis, calling Bitcoin both “toxic” and “dangerous.” But his assessment has drawn condemnation from Bitcoin loyalists, who say he is out of touch and has a fundamental misunderstanding of the cryptocurrency. Bitcoin, even with panic resulting from the Mt. Gox issue, is still trading at over US$600[3], though it is still several months before the “first half” of the year is finished.

If the predictions of many become reality, and Bitcoin’s rise turns to an even more dramatic fall this year, what is the likelihood that gold can recover as a result of a Bitcoin collapse? This is a question author and technical analyst Michael Kahn[4] has attempted to answer:

“Briefly … the price of Bitcoin exceeded the price of an ounce of gold. While it makes for great headlines, the comparison is not any more valid than comparing gold to the level of the Standard & Poor's 500, or apples to wildebeest. None of it makes sense. You cannot hold an ounce of Bitcoin on your hand. Perhaps Bitcoin, not gold, is indeed the future of money. But … the dangers of buying into a bubble are the same as attempting to sell it short. … Investors might consider waiting for a significant shakeout in Bitcoin before taking the plunge. Or they can follow gold lower as they wait for a spark that triggers a massive short squeeze as bears rush to cover their bets.”

At the end of 2013, a single Bitcoin was worth approximately as much as an ounce of gold. Not quite two months later, and Bitcoin’s current dip in value serves to reinforce its label of volatility.  As we move further into 2014, investors on both sides are eager to see if Bitcoin will gain security and rise again, and what, if any, effect this may have on gold.

Arguments against Bitcoin often include the fact that it isn’t tangible, like gold or paper currency, and that unlike actual money, you can’t walk into most shops or restaurants and pay with Bitcoin. But this is changing. As Bitcoin expands to more than an investment option, will its potential uses as an actual currency give it a leg up on gold?

At the end of the day, the discussion will move from comparing commodities to how those commodities can be exchanged for services and value. As digital empowers customers to pay in multiple forms (Bitcoin, PayPal™ or otherwise), the type of commodity starts to matter less, and what you can exchange it for becomes the discussion. 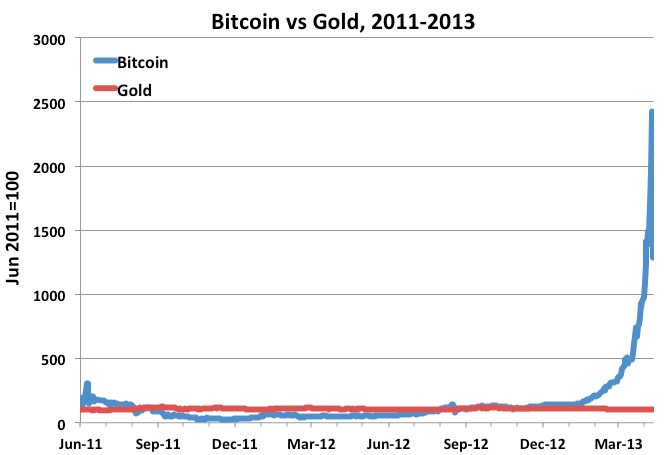 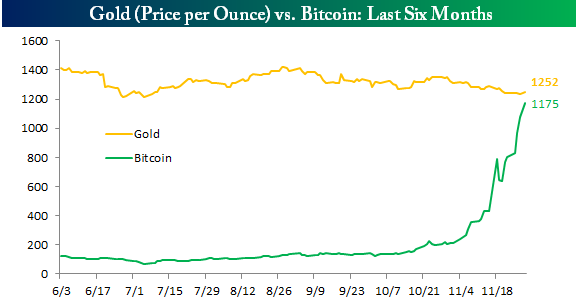